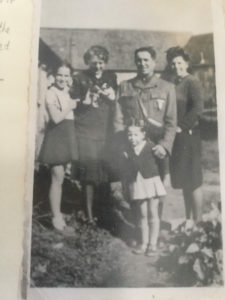 Andre Ganez in uniform visiting the farm where the family was hidden. Anne Salard, Andre Ganez, his wife, and daughters, Yvonne and Micheline and their pet dog, Whisky.

Andre Ganez enlisted in the French army  about the time when war was declared against Germany in September 1939.  The “phony war” lasted until the Germans invaded France in June 1940 when General  Petain took over the government  and signed an armistice with Germany.  Andre was demobilised and there followed  a period when most Jews moved to below the “demarcation line”, about half way down France. The Germans governed the northern half until they took over the whole of France shortly after.

France also set up a special unit, the Milice, to deal with Jews.  Andre and his wife had become very close friends with a Catholic couple, Anne and Felix Salard, who lived near them in a suburb north of Paris called Enghien les Bains.  Anne worked as the mayor’s secretary and warned Andre and his wife when she heard that Jews would be arrested.

These friends then organised for the Ganez family, including their two daughters,  to go below the demarcation line.  Andre worked initially in a coke making enterprise and then joined the French Resistance, as there was quite an active group in that area (the Nievre department) and this group focused on destroying transport (roads, trains etc).   Meanwhile, Andre’s wife and two daughters were hidden on a farm in a little town called Azy le Vif nearby and later Andre joined the FFI ( French Forces of the Interior)  set up by General De Gaulle. 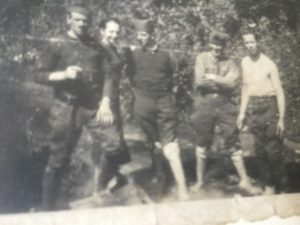 The FFI ( French soldiers who had fled to England) entered France  with the Americans and the town of Enghien les Bains near Paris (where the family had lived previously) was liberated on 26 August 1945.  Andre  was demobilized, but Felix Salard (by then a commandant in the FFI) was murdered by collaborators on 26 August.

(Andre’s daughter, Micheline Lane has the letter that Anne wrote to her mother about the day of the 26th August and what happened to Felix.)

Anne Salard then brought the Ganez Family back to Enghien and organised accommodation for them, as everything had been taken by the Germans.

Andre Ganez was promoted to sergeant sometime during his service.