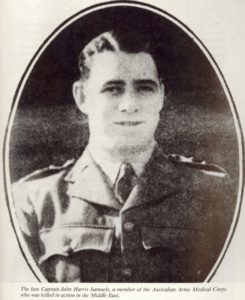 Born in Sydney in 1914, Captain John Samuels was a schoolboy hero figure who became a doctor. However in October 1942 at the age of 28, he was  killed by a German shell, whilst operating on a wounded private soldier in the front line at the Second Battle of El Alamein. The soldier subsequently died and the two men are buried side by side in the El Alamein Military Cemetery.

At the time of his death Captain Samuels was the Regimental Medical Officer of 2/15 Battalion of the Australian 9th Division. By then he had served in Palestine, Syria and Egypt and had also been one of the immortal “Rats of Tobruk”. His medal collection includes the unofficial Siege of Tobruk Medal.

Captain Samuels was educated at Newtown North Public School and Sydney Boys High School, where he had an outstanding record as a scholar and sportsman. He represented his school and university in rowing, rugby, athletics and cricket. He graduated from the University of Sydney in Medicine in 1938 and became a resident medical officer at the Royal Women’s Hospital, Paddington. He then served as a medical officer in hospitals in Queensland.

He was a greatly admired RMO who commanded the respect of those above and below him in rank and his dedication and courage were demonstrated by the fact that he was killed on the front line of the battle.

On 14 September 1942 he wrote a letter to the Young Men’s Hebrew Association which was published in its newsletter. The letter stated,

‘You’d be interested to hear that Padre Goldman organized a (Rosh Hashana) service, indeed a difficult job in this part of the Western desert where we’re all very scattered. The lads enjoyed it immensely and amongst other things it was the means of renewing old friendships. There were 50 present and after the service the Padre turned on cake and fruit, both rare delicacies here.’

The newsletter noted sadly that by the time of publication, he had been KIA the next month.

In 1945 his aunt, Mrs R. Gardiner, established a scholarship in his memory at the Faculty of Medicine, Hebrew University of Jerusalem and it was awarded annually until 1958.

The foyer of Cremorne Synagogue is named after him, thanks to the Balkind family.

By way of historical context, NAJEX notes that the First Battle of El Alamein was fought in July 1942 and halted the German advance towards Egypt. Had it been lost, the Jews of Palestine would almost certainly have fallen into the Nazi extermination machine. Indeed the situation was then so dire that the British military and consular offices in Alexandria, some 100 kilometres away from El Alamein, had started burning their files. When smoke and cinders filled the air in Cairo from the burning papers at the British Embassy, they called it “Ash Wednesday”.

The Second Battle of El Alamein in which Captain Samuels was killed, broke the German lines and turned the tide in the North African Campaign. After the war, Winston Churchill wrote: “Before Alamein we never had a victory. After Alamein, we never had a defeat.” 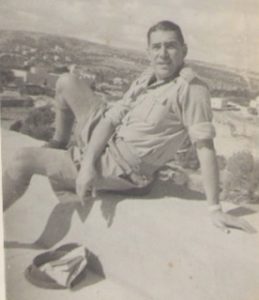