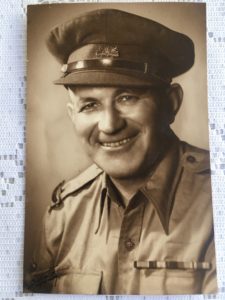 A composer, musician and linguist, Louis Shifreen served in the Middle East in both World Wars.

He was born in London on 20 September 1894 of Russian parentage and in WWI he volunteered to join the Worcester Yeomanry.

In 1941 he volunteered for the 2nd AIF and put his age down two years, so that he would be eligible for overseas service. He served with AIF Headquarters in Egypt, Palestine and Syria, acting as court-martial reporter and interpreter, due to his proficiency in several languages – German, French, Russian, Hebrew, Yiddish and Arabic.

On his return to Australia in 1942, he was attached to the Legal Office at Victoria Barracks as a court reporter and was eventually promoted to WO I. He was discharged from the Army in 1952 on the grounds of age and then obtained a clerical job with the Department of Public Works where he stayed for about 10 years.

Having been conductor of the Great Synagogue Choir in London, Louis Shifreen had come to Sydney in 1928 to take up the position of choirmaster at The Great Synagogue and he served in that position until 1936, also becoming Assistant to the Secretary of the Synagogue in 1933. Subsequently he was Choirmaster at Central Synagogue and at its Annual General Meeting in 1945, he and the choir were commended for their Pesach and Rosh Hashana broadcasts on Radio 2UE. 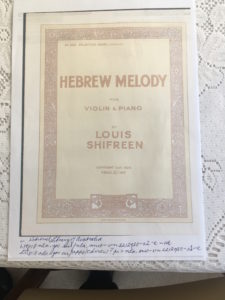 He was a talented musical composer and arranger and a recognized authority on choral works and he adjudicated in several Eisteddfods.

In November 1931 he presided over a meeting at the Maccabean Hall, at which it was decided to establish a Jewish Musical Society for the purpose of producing musical plays and if possible, operas in costume. Following the launch of the Society, in 1932 he produced and conducted Wallace’s opera Maritana, which ran for 3 nights at the Maccabean Hall for benevolent purposes. It received very favourable reviews in the Hebrew Standard and the Sydney Morning Herald and the Patron of the Society, Judge Cohen, publicly complimented Louis Shifreen on “the highly successful and efficient performance”.

In 1935 the Hebrew Standard reported:

“On Sabbath April 20 (Chol Hamoed) Rev. M. Einfeld and the Choir of The Great Synagogue will introduce a complete new suite in G for opening the Ark and taking out the Sefer, which has been composed by Mr Louis Shifreen, the Choirmaster of The Great Synagogue. Many of Mr Shifreen’s compositions already form part of the Synagogue service, notably Ashrei, Mi Sheberach, Rosh Chodesh Benschen, Birchat Cohanim and several pieces sung on the High Festivals.”

Louis Shifreen died in 1968 and is buried in the Jewish Military section of Rookwood Cemetery. He had two sons, Joseph and Max and was a Justice of the Peace for 35 years. 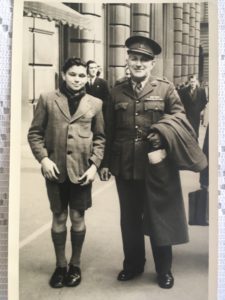 Louis Shifreen and his son, Joseph

With thanks to Louis Shifreen’s daughter-in-law, Miriam Shifreen who provided some of this information and the photographs.