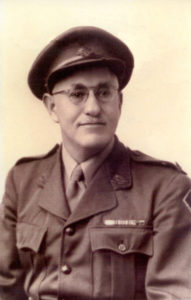 Sidney Solomon Rosebery was an Australian who found himself in Britain at the start of WWI and so he enlisted there in 1914 as a field Medical Officer in the Royal Army Medical Corps and served with the British Army in the Near and Middle East for almost 6 years and was twice Mentioned in Despatches.

During this time he completed a study on the treatment of dysentery and his recommendations were officially adopted as standard practice by the British Army.

Returning to Australia in 1921, Dr Rosebery became a much loved doctor in his hometown of Manly and in the 1930’s a Macquarie Street Physician. 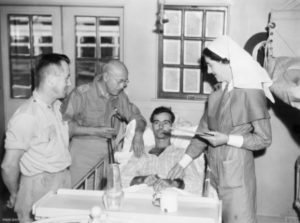 Major Rosebery with a patient during WWII

When war again broke out in 1939, Sidney once again enlisted, hoping to be sent to the Middle East with his son, Arthur, who had already enlisted in the AIF. At the age of 57, Sidney was only able to enlist by lying about his age, as he was far too old for active service.

At the height of the impending Japanese invasion, Sidney was the Chief Medical Officer aboard the hospital ship Manunda and was involved in the New Guinea and Borneo campaigns. He again was mentioned in dispatches for gallantry on several occasions, operating under severe conditions. Once home in 1946 Sidney died of multiple diseases including dengue fever and malaria as a direct result of his active service.

In his book, Australian Jewry’s Book of Honour World War II, Gerald Pynt wrote of him:

“There is no doubt that this long and grueling toil which continued for some months after Japan’s surrender sapped his strength. He was still in the AIF when he died in Sydney and was buried at the War Cemetery at Rookwood. The esteem in which he was held was indicated by the numbers who attended his funeral. They were of all creeds and occupations – soldiers and civilians, scientists and sportsmen, men in high and humble places.” (pages 34,37)

His extraordinary character and devoted life of service is described in the obituary below. 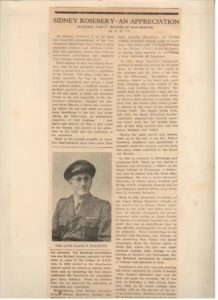 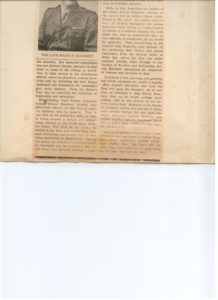 In 1997 at a special ceremony at the Sydney Jewish Museum attended by about 50 people, a new exhibit entitled ‘Families at War’ was opened, presenting the family of Sidney Rosebery – he and his wife, Dorothy (National Canteen Service) and their four children, Arthur (AIF), Beryl (WAAAF), Marion (WRANS) and Ruth (AWAS), who all served.