“Never in the history of Jewry in this State was there a more brilliant (event) than the historic occasion of the opening of The Maccabean Hall, that hall erected as a community centre, as some recognition of the part that Jewish soldiers of NSW had played in the Great War.”

(Click on the image to see a readable version.) Jews on Both Sides 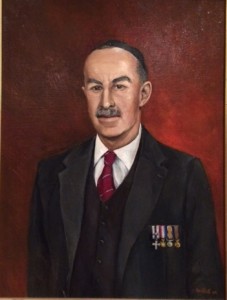 In the November 1964 issue of Detail Abraham Rothfield BA MC and Bar wrote :

“(After the Battle of Cambrai) a young company commander, modesty forbids the mention of his name, was supervising the clearing-up of his section, when there suddenly came a loud cry. “Look, sir, they’ve got Chinese fighting for them.” The caller was holding up a small book, pocket size. (As a matter of fact we had a large Chinese Labour Corps working for the British behind the lines.)

What the man thought was Chinese was Hebrew.

The officer took a glance at the book and said “I’ll take charge of that.” He still has it, suitably inscribed with the name of the nearest village, Marcoing and the date. The book was the first of the Five Books of Moses, or the Chumosh, or Pentateuch. It was the book Bereshis or Genesis and the corner of the page where the Sedra for that week began was turned back. The crease mark is still there.

The German soldier who had the Chumosh must have been a “froom” Jew; thank God he escaped with his life.

The book, that copy of Bereshis, picked up in such a remarkable manner on the field of battle, remains today, after the passing of nearly half a century, among the most cherished possessions of that, no longer young, company commander of the Durham Light Infantry.”

The Synagogue in Changi This is the Synagogue created by Sergeant Sam Biner (8th Division) within the confines of the infamous Japanese prisoner-of-war camp at Changi.

The induction of the Synagogue took place in August, 1944, with Jews from Holland, England, India, America and Australia participating in the induction service. Regular services were held each Friday evening and Saturday morning and lectures were given on Sunday afternoons. The services were generally led by a very orthodox Dutch Jew called Nussbaum The Synagogue could hold a little more than fifty men and was the largest religious hall or church in Changi prison.

Sergeant Sam Biner enlisted in Victoria and later lived in Sydney and became an officer of NAJEX. He was a POW in Changi for 3 ½ years. The prayer book he used there was given to him by the Japanese after it had been sent out from Jewish sources in America. In Changi Sam became the camp electrician and was able to arrange blackouts, so that he had to go into the kitchen area or cool room to replace fuses. His large bag of tools was often bulging with fish and other food when he emerged

from “replacing a fuse”.

(The drawings of the Synagogue were made by Fred Brightfield.)