Jewish Chaplaincy has a long and distinguished record in the Australian Defence Force (ADF) It is part of the ADF Chaplaincy program and is currently represented at the highest level by having the Senior Rabbi to the ADF as a member of the Religious Advisory Committee to the Services (RACS). RACS comprises five senior Christian clergy representing the major churches and a Jewish representative. All are equal in rank and role, non-uniformed but with the status of two-star officers.

RACS responsibilities include oversight of chaplaincy work in the ADF as well as providing advice to the Chief of the Defence Force on spiritual and ethical matters. The Principal Chaplains of each of the Royal Australian Navy, Australian Army and the Royal Australian Air Force attend these meetings, contributing towards inter-faith harmony.

Jewish chaplaincy focuses on providing religious, spiritual and cultural support for Jewish ADF members. Support is, wherever possible, provided through visits by the Jewish Chaplain or by giving support through the local unit Chaplain, by e-mail, phone contact or by sending “care packages” containing a siddur,

Each year a Pesach Matzah Package and information booklet is sent out to known Jewish ADF members.

An information pamphlet is also usually e-mailed or mailed to all Jewish ADF members before the Yamim Noraim (Rosh Hashanah/Yom Kippur).

We seek out and stay in contact with as many Jewish ADF members as possible. The chaplains also have the demands of their regular unit. We usually have some Jewish personnel serving in overseas operational areas. We work constantly at updating our own database and welcome any information about Jewish ADF members.

A secondary function of Jewish Chaplaincy especially through the office of the RACS member is to establish links with the military and chaplaincy hierarchy in order to gain recognition of our unique needs and to act as champions on behalf of the Jewish ADF members. This involves promoting Jewish Chaplaincy through the general media and through functions such as Chanukah parties at headquarters in the key centres.

A third function of Jewish chaplaincy involves outreach to the Jewish community, to advise the community of our role, to enhance the status of our chaplains and to provide liaison and support to the parents of Jewish personnel especially those serving in overseas operations. 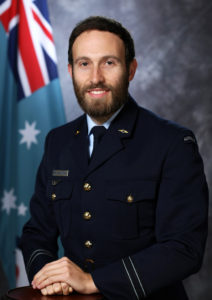 Chaplain (Captain) Dovid Gutnick is Unit Chaplain of 22 Construction Regiment and Chaplain (Flight Lieutenant) Yossi Friedman of 22 Squadron has recently joined the Air Force as a chaplain and is undergoing training.

For further information about Jewish Chaplaincy in the ADF, please contact Rabbi Genende on [email protected]